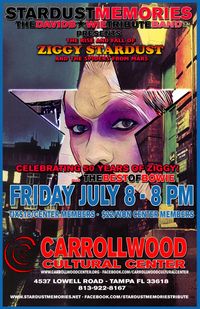 This year celebrates several milestones for David Bowie. Most important, yesterday marked what would’ve been his 75th birthday. Next to that is the 50th anniversary of his iconic breakthrough album and persona - Ziggy Stardust. And what better way to observe this milestone than with a performance of the entire Ziggy album plus a good smattering of Bowie hits, classics and deep cuts as we had previously done in 2017. In other words - After a 2 and a half year break, Stardust Memories is coming back to the stage to, once again, celebrate all things Bowie! We are really looking forward to putting on this one.